Heidi’s Home Rescue is a foster-based non-profit rescue in the F/M area founded by Karlee Laubach  who is dedicated to providing a world where animals are respected, valued and cared for by connecting them to loving families in their forever homes.  It was Heidi and her situation that inspired the organization of this rescue.
​
At roughly two years of age, Heidi, a Shar Pei/bulldog mix, was about to become another unfortunate statistic of euthanasia in the Southern U.S.. Thankfully, someone knew she had so much more life to live and the quick actions of a Midwest dog rescue brought Heidi (along with many others in this situation) from that kill shelter in Texas to North Dakota. The rescue found a foster who was able to take her in. Sadly, it did not work out due to other animals in the home. From there, she transferred to another foster home. The odds continued to be stacked against her as those fosters’ living arrangement had changed and again she was displaced. The rescue matched her with one more foster but the same sad story remained that inconsistency was her only consistency. All this change took place within the timeframe of a month. Heidi was strong-willed and was not willing to give up on her forever family and home –which the rescue was well aware of. Heidi was temporarily placed in a boarding facility so she would have at least her basic needs met. Time was passing and the rescue’s options and resources were being depleted. There was then talk about having to put her down which would be the last resort. Denise, who was helping with Heidi’s case, could not give up on Heidi and reached out to her friend Karlee. Karlee (along with her other furbabies) provided an emergency foster home for Heidi. Within several weeks of being in Karlee’s home, Heidi learned multiple tricks and basic obedience very quickly. Not long after, Karlee felt it was time for Heidi to spread her wings and find that forever family. After connecting with two different families on social media, one of those potentials fell through. It was a definite sign as the other family was very interested and hopeful to bring Heidi into their family.  After back and forth communication and Karlee’s due diligence with reference checks, the confirmation was given that Heidi would become their newest family member. Karlee and the family kept in touch after the transition and positive and loving reports continued to be relayed and recounted. Heidi beat the odds and is now and continues to be happy, healthy, settled, and sweetest of all –part of a family. She has bonded so well with her new family that she has even become one of the members’ emotional support animal. 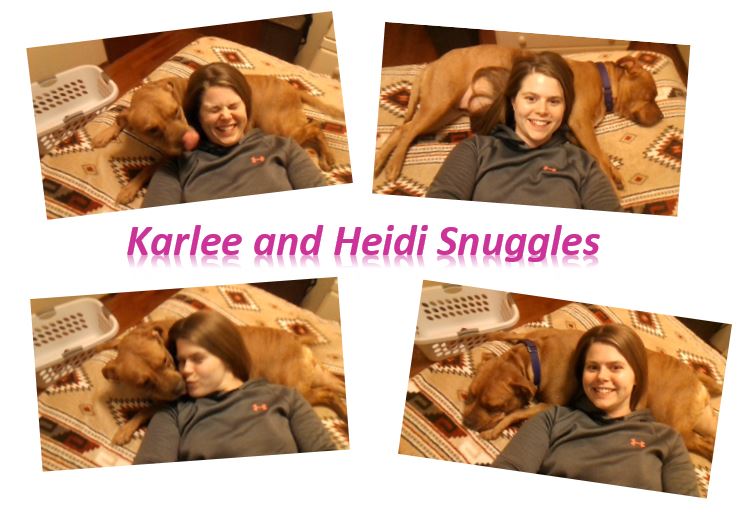